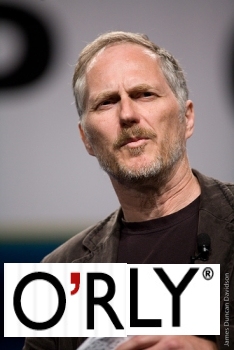 I maintain another blog called Open Season which is all about openness and open source. I’ve been using it to share links to articles, along with a sample quote each time. Each post takes 25 seconds or so with Tumblr.

I wrote about it here in June 2009. Just mentioning it again as some of the recent articles I’ve read have been splendid.

I make no claims to comprehensiveness there, it’s just my own findings on themes related to openness. And conversely, closedness and proprietary systems.

I have a feeling these themes will come to define not only technology, but our wider culture and society in many ways.

If you want to follow a “proper blog” on this stuff, read Open by Glyn Moody.

And of course everything written by Tim O’Reilly and his colleagues is worth a read. (He’s pictured here, perhaps questioning a future web that isn’t small pieces loosely joined.)

I went to a public meeting at the Assembly buildings in Cardiff last night, which was a chance to meet Wales’ new Cross-Party Digital Group and have a discussion to answer the question:

“How can we make better use of new media and digital technology to engage with the people of Wales?”.

The members of the group are the Assembly members Alun Cairns, Peter Black, Alun Davies and Bethan Jenkins. Not all of them could actually make it but as an intro conversation with q&a it was worth attending.

Foomandoonian has blogged last night’s line-up (with representatives from Google UK, Oxfam GB, MessageSpace and chaired by Rory Cellan-Jones). He’s also blogged some of his highlights of what the guests said.

Below are some of my thoughts. I did raise my hand and ask a question about monitoring blogs and other social media. I also filled in a feedback form (on good old paper). Maybe I can explain/expand on them here. I’m offering them from my perspective and as someone who works with the web and is interested in seeing Wales do well.

Getting attendees at the meetings. I get the impression there will be more of these meetings. “Engagement” is a popular word to drop in, how can we actually do this? Well, for what it’s worth I only heard about the meeting because a friend emailed the details to me. Otherwise I would have missed it. So next time please put a page on the Assembly site about this meeting. Then it can be found by Google and we can send it around by email, blogs, Twitter, Facebook and all the other various networks. Whatever existing publicity there was worked well because there were about 80 people in attendance, give or take. This was described as a good “turn-out”. It seemed that most of these people were middle-aged white men in suits. It’s just an observation, there were exceptions of course and it’s actually a good start. But not to have an open page (none that I could find anyway) on the web about a digital Wales meeting is missing a trick. Get a bigger room next time because we’ll be spreading the word!

The meeting itself needs to be more open. The meeting is already somewhat open because people are blogging about it and some people were using Twitter with the hashtag #digitalwales. Please record it next time. Just the audio will probably be fine, with a roving mic for questions. Document the whole thing. That is engagement because you can upload it somewhere and make the best use of public money. It’s a public meeting, so make it as public as possible! There’s no reason why time and space should prevent people from at least hearing meetings anymore. Someone in Pen Llŷn will thank you. I recently wrote about recording meetings on my Native blog.

Bill it as open. This is a public meeting. If people want a private discussion with the AMs involved, there are already lots of ways (email, phone, face-to-face). So just make it clear to attendees that things will be recorded and for the benefit of everyone in Wales.

Let’s have a discussion about open data in general. The USA house their open public data at data.gov and the UK are not too far behind with data.gov.uk (not launched yet but currently on a developer preview). On the feedback form I suggested mySociety as guests for a future meeting because they’re probably the UK’s leading experts on making tools that use political and other data to benefit the public. Good to see that this is what they’re planning. There are almost definitely opportunities for Wales in open public data. By that I mean business opportunities that create employment and projects which help communities – as well as ways to understand the viewpoints, hold politicians to account and run a proper democracy.

But we would like Assembly data in standardised formats please. The online transcriptions of AM speeches are a bit disorganised at the moment. If the Assembly exists to serve Wales, then one way to achieve that is to make them machine-readable. Ideally this would be XML format, but it doesn’t actually matter as long as it’s consistent all the way and the original language and translation are clearly indicated (English and Cymraeg). Then all kinds of things become possible. A good example is the volunteer project They Work For You, which has a search engine for parliamentary discussions and related functions. It has UK parliament, the Scottish Parliament and the Northern Ireland Assembly – but it’s missing the Welsh Assembly. I’ve written about the need for They Work For You to index Welsh Assembly discussions before. It’s been discussed on a mySociety mailing list and we welcome all coders! But the main point is NOT to raise the specific issue of They Work For You because it’s a volunteer project and only one of many possible applications. The point is making it as easy as possible for citizens to use the data.

Good broadband access. There was some discussion of this last night. I don’t know much about the situation elsewhere in Wales, other than that it’s important. Broadband is infrastructure, like railways. In the past, the railways moved coal and steel. Now we also move information, at much higher speeds. As with any infrastructure, it requires good usage – there is no magical transformation. But it does increase the possible ways people can communicate, learn and work.

Let us see the political process. So much of the discussion at the Assembly and the Assembly Government is private and it doesn’t need to be. I suspect it’s private because people tend to rely too much on email and waste opportunities to “engage”. The question for ministers and staff should always be: does this NEED to be private? If yes, then use a private method like email. If no (could even be the majority of cases) then quickly upload/publish it somehow (blog or wiki or some other tool). Now email the link to people. Thanks, you just opened up the political process! Don’t spin or polish the posts. We’ll vote for you if you’re honest and you communicate.

Some quick notes on tools. Posterous is a good tool because you blog by sending it an email. It’s not the only one with this feature but it’s quick, easy and free of charge. Facebook is OK here but be careful. By default your personal profile is not open – it’s halfway between private and public. My suggestion here would be upload/publish on an open platform (blog etc.) then post a link to Facebook for your friends and supporters.

I could have emailed my thoughts here to somebody. But I blogged them instead. Now anyone can email the link to anyone – or link from anywhere. It doesn’t mean they will but it allows it. People can also find it via search. I’d like to see this model in action.

Your blog posts don’t have to be as long as mine! Preferably they would have a name and a face next to them, not a logo.

Search is key. An AM should probably monitor (or have someone monitor) mentions of their name and issues they care about. Google Alerts are OK, but RSS is probably better. It’s not “ego searching” to look for your name. It’s… that engagement we keep talking about.

Thanks for reading, comments are open.

[ UPDATE 10/02/09: As pointed out by Steve Anderson below, the two MMR blog posts have been removed altogether from Jeni Barnett’s personal blog – with no explanation. It doesn’t exactly underscore credibility for her arguments, does it? If she would like to retract any of her statements then it would be better if she did so explicitly. The original blog posts remain archived here, with the comments. ]

On Monday I wrote a piece on Native blog about the LBC Radio story where presenter Jeni Barnett discouraged the use of MMR vaccine in children – on very spurious grounds indeed.

The Times now have an insightful opinion piece called The preposterous prejudice of the anti-MMR lobby.

I just went back to Jeni Barnett’s personal blog to see how many people had commented (almost entirely to signal their disapproval of her views). It had been 82 comments for Bad Scientists and 134 comments for MMR and Me.

But now the counts both stand at zero because the comments have been deleted.

If you’re curious to see what people wrote – in the interests of openness, public information and rational debate – the original pages are here.

Please do not attempt to leave a comment on these pages – it won’t work.

Nothing has been changed in these files.

I have retained the filename of Bad Scientists which appears to be a past vestige of a previous title.

These pages are very similar to what you’d find in Google’s Cache, although that may only exist for approximately a week.

Quick intro to my working situation.

Native is a business that helps you with online media, based in Cardiff, Wales. It’s a two-headed partnership, of which the heads are me and Tom Beardshaw.

Never did I drink so much coffee as these past few weeks.

During our chats it has emerged that we’d like to have somewhere to round up interesting articles – for our clients, people we’re training and people who’d like to find out what we’re thinking. These are often curious yet busy people who want inspiration but don’t have time to subscribe to an imperial tonne of blogs.

So as well as the personal blog you’re currently reading, I am also writing regular posts at the Native blog.

I’m covering online media and how it affects business, particularly creative business and business based in Wales.

It has a different tone to Quixotic Quisling. The Native blog has fewer ramblings and more news. It is more frequent and more linky. Actually often it will be a set of recommended links with assorted commentary, open-ended questioning and provocation. I’m following Jeff Jarvis’ guideline – cover what you do best and link to the rest.

We’ll also be posting info on Native web projects. Tom and I are retaining our autonomy as freelancers but have set up Native for bigger projects where we complement each other.

Recently we have been working out what we do and don’t do. “Cover what you do best and link to the rest” may apply to more than just URLs.