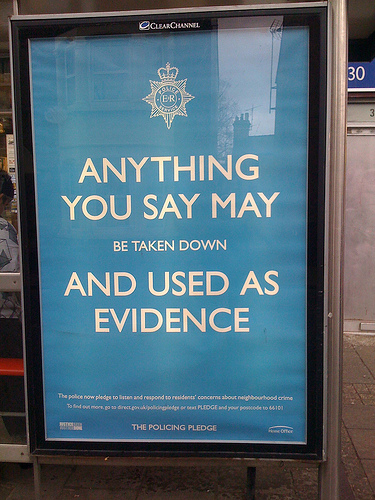 The police have some new posters on display around the UK. I don’t like the posters. It was a definite case of dislike at first sight.

It turns out the posters are there to advertise the new Policing Pledge:

The Policing Pledge is a set of promises to local residents that not only gives more information about who their local neighbourhood policing team is, but also ensures that communities will have a stronger voice in telling the police what they think is most important and what they are most worried about.

We’ll have to see if that turns out to be successful. The posters themselves contradict both of those aims. So judging by the posters, I don’t think they’re on to a good start.

PR, publicity and communications for the police is a difficult job, worth doing carefully. I think they’ve got it wrong because the way they’re communicating clashes with the intended message. The medium, the method and the message are all at odds. I’ll try to focus mainly on the posters as communication. This is not a personal rant against the police – I’ve not had any major dealings with the police as an organisation. If anything I try to avoid them wherever possible, as a good citizen should. Who knows what the police themselves think – this campaign is mainly about Home Office diktats of course.

I had a whole load of thoughts about this campaign all at once. I’ll attempt to summarise them now.

Confusion
As other people have pointed out, the perceived message of the posters is unclear. I first saw the posters on bus shelters in Cardiff city centre. They are very eye-catching but I was in a hurry to go elsewhere. So I was left wondering what they’re advertising. My first question was “are these teaser ads for a new film?”. Really it just made me think of cop shows and how awful it would be to get arrested and hear those words in their original form. (I had to use my imagination. I’ve never been arrested.) I wasn’t left with any impression of how personable and nice the police now are. Or are being commanded to be.

Lack of depth
How many people will take time to research the underlying message about the Policing Pledge? The original press release about the adverts might tell you something. I learned that the adverts ostensibly publicise some well meaning changes in the police that Home Secretary Jacqui Smith has ushered in. And that other citizens are subject to a large scale campaign of confusion, not only in Cardiff but across the UK and across a variety of media including radio, press adverts and digital. On closer inspection of the poster it says “The police now pledge to listen and respond to residents’ concerns about neighbourhood crime”. Isn’t that what they’re supposed to be doing anyway? By that measure, it’s merely a publicity campaign, spending our money to correct our perceptions. It raises more questions than it answers.

Unintended messages
You may have seen the slogan “Keep Calm And Carry On” on posters and t-shirts recently. It’s a poster design from the archives of World War II, when invasion of these islands was expected. It’s now the direct inspiration for this new police campaign. The original has grown in popularity because it’s a quaint relic of a bygone era which has seen its message of stoic British resolve reapplied now. It’s all very tongue in cheek. By using this format, the Home Office may be seeking to be trendy – but they just end up co-opting aspects of what the message meant then and means now. The original was simply a propaganda poster. Draw your own conclusion from that.

Institutional
Orwellian is a word that has been used about the police posters. It’s an almost artless design and very “official” looking. This just likens the police to an institution, rather than individuals who speak with a human voice – and listen back. I did have a thought that PR Week may have covered this and would give me the details of which agency had received how many thousand to throw together this campaign. I found a recent quote from Jacqui Smith saying she hoped to “increase public confidence by 15%“. This is vague at best. It made me think of the film adaptation of Nineteen Eighty-Four when the tannoy repeatedly announces to the proles that living standards have improved by x percent. Smith says in the article that she’s “scrapped all but one central target for the police – to raise public confidence”. Public policy is not my area of expertise but I thought “public confidence” was something you earned indirectly by conducting your service in a way that’s effective, sensitive, impartial, speedy, intelligent and things like that. They could have gone for a cheesy picture showing community relations in action. In my head I’m imagining a uniformed police officer shaking hands with a smiling youth while an old lady looks on approvingly. That would have been clichéd, but better.

Advertising
Mainly though, my confidence in the police was unaffected by this advert. Arguably, advertising is a poor medium to get that across. You can’t use a cheap tactic to grab attention and then make your more subtle points in other media. It just doesn’t work like that. If it’s part of a media mix then each element has to make sense in isolation. Advertising is by and large, in my opinion, a self-referential medium. You always know you’re reading adverts. They make you think about the way advertising pervades society and also about specific advertising campaigns – whether they’re effective and that sort of thing. With other media you “zone out” and listen to the message. That applies to a conversation, phone call, television programme, radio, a newspaper article or this blog post. You have a chance of thinking about someone’s thoughts and taking your mind off the medium itself. I’m pretty sure I’m not alone in saying that – advertising makes you think of advertising. If you’re interested in communications as I am, then you also wonder how much money was spent and what’s being done to measure the effectiveness (if at all). It’s comparatively easy to measure value of marketing for a commercial product, but less so for a Home Office strategy. Besides, advertising is one of the least trusted forms of communication. The value of print advertising to business buyers is declining – look at the way newspapers are struggling. That should tell you something.

Broadcasty
This is supposed to be about local policing. But there is a pool of only three slogans (I think) which are the same, uniformly across the UK. There is one aspect of this which forms an exception – there are Welsh language versions of the posters on bus shelters, at least in Cardiff and probably elsewhere in Wales. They look very similar and say essentially the same thing as the English versions. That’s at least a concession to “local”. But it’s not local enough. Try harder. Again, model what you’re trying to say. It’s not enough to broadcast the promise that you’re listening to individuals.

Only a bit digital
The mention of a digital part of the campaign intrigued me. But when you follow the URL mentioned in the poster, you go here. It has a copy of the Policing Pledge and a search engine taking you to a page about your neighbourhood policing team. Unless I’m missing something, that’s it. I also found a bizarre page of commands about linking to Directgov which I’ll ignore, thanks.

There are other ways to communicate which are more nuanced and interactive. Initially, you can monitor blogs. This will give you some insights into what people are saying in local communities about the role of the police. It won’t tell you what everyone’s thinking because at the moment only a few individuals have blogs, arguably within a certain social group. But you would get some genuine feedback. You also have the opportunity to comment directly, in a transparent, open fashion.

In a wider way, you can also monitor Twitter searches (which can be thought of as a kind of blog). Even Flickr is a bit like a blog platform, in the sense that somebody can run their own media outlet for photos. The barriers of entry to both services are lower than that of a written blog. Again, that’s a good way to get opinion and respond. Be prepared to see people remixing your messages, as they did with the recent terror scare posters in London.

For companies, social media now allow you to do some of your customer service in public. That could work equally well for the police, even though they don’t have “customers”. While I’m on it, neither should they use the term “service users”. “People” might be a good term. I genuinely hope they’re reading this blog post – that would be a welcome bit of police surveillance. (Disclosure: my work involves online community building.)

You could possibly use online video. Show your face. Introduce the neighbourhood policing team for each area. It would be cheaper than advertising and it would persist for longer. It would be a start. (What about the digital divide, does that create a barrier to access? Well, the current ads only give two options if you want to find out more – visit a URL or send a text. I sent a text and it just sent me the info on my local neighbourhood policing team, as above. Either way, the technological requirements remain the same.)

There are also good established ways. Go out and meet people. Listen to them and have a two-way conversation. I’m pretty sure there are police who understand this. It’s about earning trust. Public confidence increases by one person at a time.

14 Replies to “Apparently I have the right “not to remain silent”… Well, cheers. Here’s what I think.”