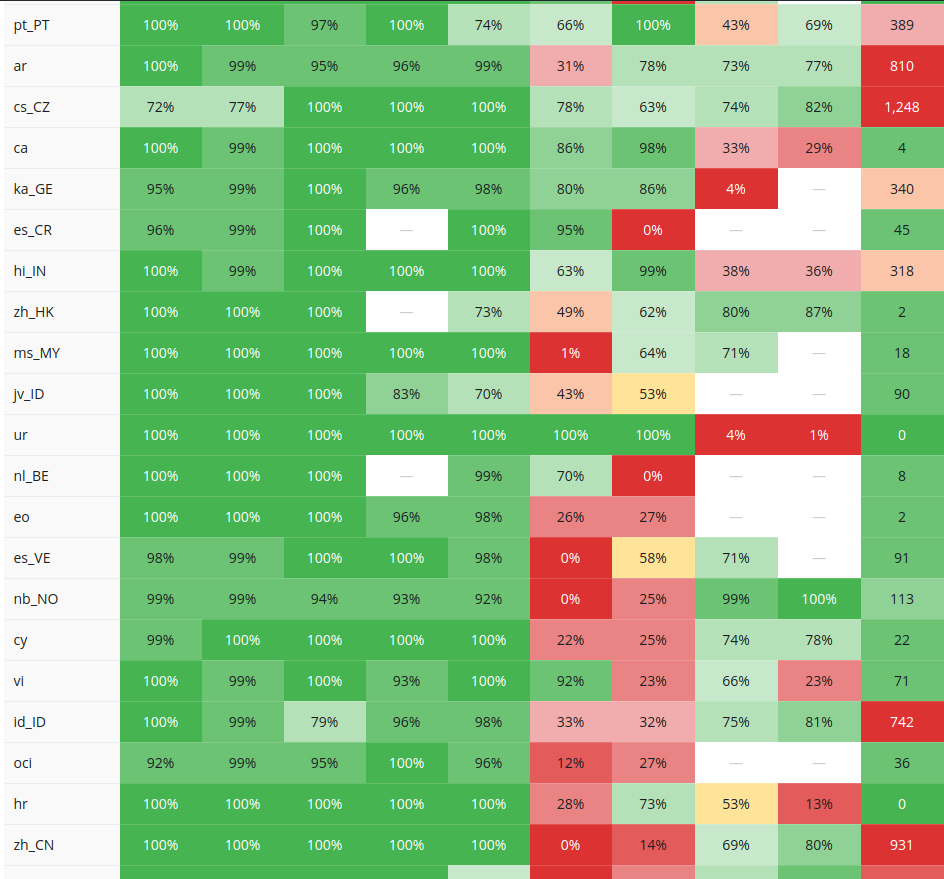 People often ask me about the best way to create and manage a truly bilingual or multilingual website. This is a common need in many contexts around the world.

For example – and to take an extreme case- Wikipedia’s various language projects all have the same underlying software but are maintained completely separately by their communities, albeit with a certain amount of adaptation and translation flowing between them.

At the other end of the spectrum is a public body which publishes two or more language versions of every piece of content.

Translation is sometimes seen as a way of fulfilling this requirement, increasingly with a translation memory. Saying that, translation is certainly not the only way and may not even be always the best way.

Somewhere in between is a sort of hybrid website which publishes all ‘publicity’ material multilingually but gives the blog(s) and ‘human voice’ content for each language its own independent life. Let me know if you’ve seen an example of this being done successfully though.

My personal record, if I can put it that way, is a website serving four languages – German, Norwegian, English and Dutch, for a European theatre project which I co-developed in WordPress for a client in London some years ago.

Many models and forms of multilingualism are technically possible and implemented around the world.

It often pains me to see organisations offering a below par experience of multilingualism. This should be core to any discussion of user experience, and worth investing in to get right. There are plenty of examples of excellent practice, and there is help available!

Outside the world of organisations I’ve just added some new functionality and a new work section to my own website, morris.cymru.

This website originally started under another name in 2008 for various musings and thoughts. Over time I’ve switched languages a bit (English and Welsh), and also gradually had a need to share more work-oriented projects.

I have retained my nine years of blog post archives, and have added code and settings to recover gracefully when a historical blog post is available in one language and not another.

Here is the technical background. I use WordPress.org. Regardless of the multilingual plugin you use you need language files for WordPress core, the theme, plugins as well as text for widgets, menus, categories, and more. The QTranslate X plugin, which is in my opinion currently the best (apart from the erroneous use of flags for languages), automates much of this searching for language files, when they are available. This plugin does require a whole load of configuration.

I’ve tried to avoid talking about blogging itself too much here. As in, I don’t do blogging about blogging. That’s not because there’s no value in that exercise nor because I have any particular aversion to meta (in fact quite the reverse). It’s just that I didn’t think I had anything new to say or contribute to the discussions. There are some great resources and conversations out there relating to blogging which are easy to find. This blog isn’t one.

Blogging has outlasted any forecast of its demise. Not a fad after all then. It’s been absorbed into our minds and society and new technologies. But some of those crazy myths still remain.

So let’s just shoot these down first. Some of the myths have re-emerged again around newer forms of blogging.

The general guideline is, if you find something of ultra-niche interest online – however boring or trivial – then maybe it’s not intended for you.

As well as that, because of this kind of online sharing somebody can retroactively compile a pie chart of how many people had porridge this morning and so on, or rather talked about it. If they want to. There’s a cumulative set of data which might become interesting even if you don’t find the individual posts interesting. (Thanks to Mandy Rose for this observation.)

That said a blog doesn’t have to be merely a personal diary, again a common misconception.

My first blog was nothing like a personal diary anyway. It was and is named Sleeveface. It had a specific format, which has remained as I’ve continued to maintain it to the present day. It actually gets better and better because it has a “community” of amazing contributors. It clearly wasn’t really a place for my writings about anything.

One blog is rarely ever enough for one person. So last year I started this blog which has become a handy place for thoughts, sometimes of an experimental nature. If I just want to add a page to the web, I do it here. I have a couple of sekrit projects which will arrive here when I get around to them.

Starting was difficult because I didn’t want to repeat anything that people had done online. On the web there is always somebody else who is more expert than you. That is initially intimidating. What is the point of writing about ANYTHING? (Eventually you chill out with your status as an expert at just being yourself.) In time the activity becomes its own reward and sometimes I hardly think about who might or might not be reading. Then to get a little comment or to have someone mention it when I see them, those are bonuses.

But initially, thinking I could actually risk rehashing what other people might have said elsewhere, except in my own words was quite liberating. Originality is over-rated!

It’s all in the words. Which I why I sometimes love to use indulgent prose, long words and also refuse to kill my darlings.

From the start I knew what it wasn’t. “What not to blog?” is a useful exercise. Let’s just say that Twitter revenue speculation, cats and advice sheets for aspiring “thought leaders” were not on the agenda. Again, those interests are more than adequately served on the web if you look.

The fact it’s called Quixotic Quisling of all things should tell you I wasn’t aiming to be a “pro-blogger”. Likewise it’s not intended as a cross-section of my life. There are big bits of my life that haven’t made it to this blog.

Now that in 2009 the all-conquering domination of the mighty Welsh language continues apace, at least in my world, I’ve been looking online for things in that language. I’ve been banging on about how I’d like to see more Welsh language blogs in existence. Eventually I resorted to offering to set up some WordPress installations and otherwise help a few individuals who I thought would be interesting – out of the epic kindness of my heart. But people were too busy. And all the usual crap.

The most obvious partial solution was staring me in the face – just start your own. In line with the carefully constructed house brand for this blog (blobby at best), I have decided just to insert the Welsh language posts in arbitrarily.

There is actually a nice number of multilingual bloggers (in various countries), from which I’ve taken inspiration here, when it comes to the practice and conventions and so on.

I won’t be doing anything bilingually like writing something then carefully attempting to translate it. Pfft! The Welsh posts will have unique things. Each will have a quick summary paragraph in English so you can decide if you want to use machine translation to check it out.

Obviously if you understand Welsh, you can just look. And laugh at the mistakes.

I was chatting to nwdls about all this and also Daniel Cunliffe who does Datblogu. Often Welsh speakers choose 100% English for their blogs and maybe it’s because people buy into the idea of the big worldwide audience and the pro-blogger thing. Obviously there’s a bigger potential worldwide audience for an English language blog. Conceivably, at least. But it all depends which world you think you live in. If we really cared about maximising raw potential numbers, we’d all learn Mandarin right?*

When I went to Barcelona earlier this year I chatted to a German lady who pointed out “Ah, you speak Welsh. Well done. That will really help you in the world.”. This isn’t a general point about German people, it’s quite a common attitude.

One reason I originally decided to learn Welsh was because it’s the second most used language in My World. So it is helping me in the world, thanks very much for the insight lady. As much as it has been useful for work, it’s not just about utility.

It is actually bringing a tremendous amount of joy to my world.

So the actual reasons for blogging in the medium of Welsh are related to this point. It’s the bespoke, personal world within the web which I see. And would like to see. After the chat with nwdls, I realised there was no need to make a big choice. I’ll do both languages in one. And Google Translate could help non-Welsh language** readers to access the extra stuff.

So, thanks Google Translate.

Google Translate is not the first attempt at machine translation for Welsh (see also: Apertium project) and is also a bit wonky. But as with any machine translation, you’ll get the gist and it may not be long before we can truly link cyber-arms and skip to a better tomorrow.

If you’d like to read some proper research on Welsh language use in blogging and other social media then Datblogu is good.

Are you in a similar position? As in, you’re not monolingual but your blog is? Consider reconsidering.

* By the way, I would like to know Mandarin. But for different reasons.